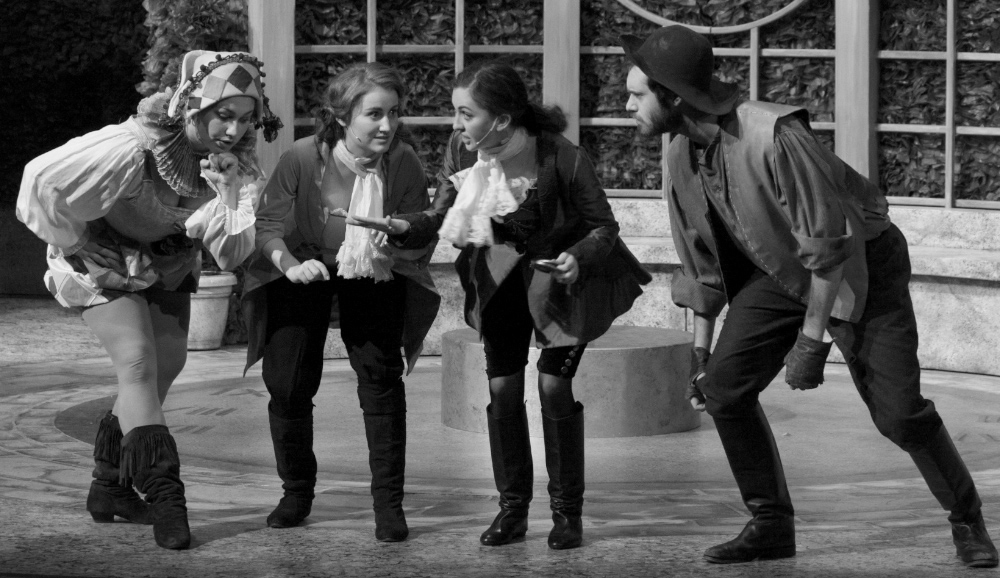 I am a sucker for a musical comedy, and all the better if it includes love triangles, gender swapping, slightly dirty puns, and clever lyrics. Fittingly, Triumph of Love, performed by UBC’s 4th year BFA students, ticks all of the boxes!

Adapted from Marivaux’s 18th century romantic comedy by American writer James Magruder and directed by Barbara Tomasic, we are whisked away to 1732 in a lush Sparta garden, where the characters, emotions, and double entendres are all running wild, free, and fast.

Patrick Smith’s lush, green set of neatly-trimmed hedges and a very versatile sundial must have taken some serious manpower hours to create, and is perfectly set off by Andrew Pye’s sunsets.

The peaceful lives of Hemocrates (Matt Kennedy), Hesione (Ghazel Azarbad), and Agis (Zach Wolfman) are thrown into turmoil when Princess Leonide (Catherine Ferguson) and her servant Corine (Cassandra Szabo) arrive in search of true love, and in the time-honoured tradition spanning from Twelfth Night to Some Like It Hot to Blackadder, swapping genders (as “dress-passers”) seems like an ideal solution to achieve one’s specific goal. What could possibly go wrong?

All characters sing, act, and, where applicable, dance beautifully, but some highlights for me were Charlotte Wright as Harlequin, whose constant cheeky grin and excellent comic timing make her a delight to watch, particularly in Act 2 when she undergoes a spectacular transformation that could easily slip into caricature, but doesn’t. Azarbad’s melodic voice and intense emotional range mean that she can handle even the most difficult songs with ease, and pint-sized Szabo as Corine steals some scenes as she juggles multiple lovers and situations, but always manages to stay one step ahead without dislodging a single perfectly curled hair.

Matt Kennedy as the wise and rational Hemocrates also deserves special mention, given that my plus-one and I both assumed from his mannerisms that he was a 40-something member of the faculty, until we took a closer look at his photo in the programme!

Underneath the comedy there are many universal truths we are all familiar with. Love is blind. Sometimes what we think we want may not in fact be what we need. And, especially true-to-life but also refreshingly true in this fairytale-of-sorts, not everyone lives happily ever after…

…However, it’s so well done that the last line will have you hooting with laughter, just as the evening began. We can only hope that real life awards us as many opportunities. Bravo!